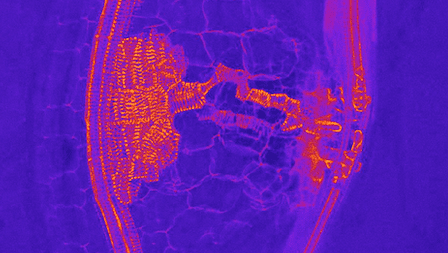 The availability of nutrients in the environment can have dramatic effects on plant parasitism, for instance, Striga infestations are reduced in nutrient rich soils. The molecular basis for this phenomenon is not well known so we decided to investigate this further with the Orobanchaceae family member Phtheirospermum japonicum. It’s a facultative parasite which infects Arabidopsis thaliana and, from our previous work and that of others, needs starvation for efficient infection. On either soil or agar, we found that nutrient rich conditions prevented haustoria formation. The effect was specific to nitrogen, and exogenous nitrogen was sufficient to suppress haustoria development and prevent haustoria-related gene activation. We found that nitrogen applications increased ABA levels in the parasite and exogenous ABA application prevented haustoria formation. Blocking ABA signaling in the parasite, either transgenically or chemically, allowed haustoria to form in the presence of nitrogen. Thus, we believe that high nitrogen increased ABA levels to suppress haustoria formation in Phtheirospermum japonicum. Other parasites might show similar effects so we tested Striga hermonthica and found haustoria there were also suppressed by high nutrient levels and the effect was specific to nitrogen. However, the effect did not rely on ABA and instead suppression could be reversed by exogenous auxin application. Thus, we believe that many parasites regulate their extent of parasitism based on nutrient levels in the soil and are doing so via hormone production. Such as phenomenon might explain in part the effects of nutrient rich soils upon parasite infestations.