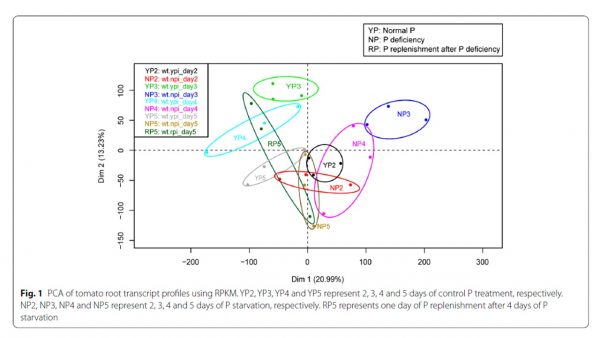 Background: Phosphorus (P) is an essential macronutrient for plant growth and development. Upon P shortage, plant responds with massive reprogramming of transcription, the Phosphate Starvation Response (PSR). In parallel, the production of strigolactones (SLs)—a class of plant hormones that regulates plant development and rhizosphere signaling molecules—increases. It is unclear, however, what the functional link is between these two processes. In this study, using tomato as a model, RNAseq was used to evaluate the time-resolved changes in gene expression in the roots upon P starvation and, using a tomato CAROTENOID CLEAVAGE DIOXYGENASES 8 (CCD8) RNAi line, what  the role of SLs is in this.

Results: Gene ontology (GO)-term enrichment and KEGG analysis of the genes regulated by P starvation and P replenishment revealed that metabolism is an important component of the P starvation response that is aimed at P homeostasis, with large changes occurring in glyco-and galactolipid and carbohydrate metabolism, biosynthesis of secondary metabolites, including terpenoids and polyketides, glycan biosynthesis and metabolism, and amino acid metabolism. In the CCD8 RNAi line about 96% of the PSR genes was less affected than in wild-type (WT) tomato. For example, phospholipid biosynthesis was suppressed by P starvation, while the degradation of phospholipids and biosynthesis of substitute lipids such as sulfolipids and galactolipids were induced by P starvation. Around two thirds of the corresponding transcriptional changes depend on the presence of SLs. Other biosynthesis pathways are also reprogrammed under P starvation, such as phenylpropanoid and carotenoid biosynthesis, pantothenate and CoA, lysine and alkaloids, and this also partially depends on SLs. Additionally, some plant hormone biosynthetic pathways were affected by P starvation and also here, SLs are required for many of the changes (more than two thirds for Gibberellins and around one third for Abscisic acid) in the gene expression.

Conclusions: Our analysis shows that SLs are not just the end product of the PSR in plants (the signals secreted by plants into the rhizosphere), but also play a major role in the regulation of the PSR (as plant hormone).