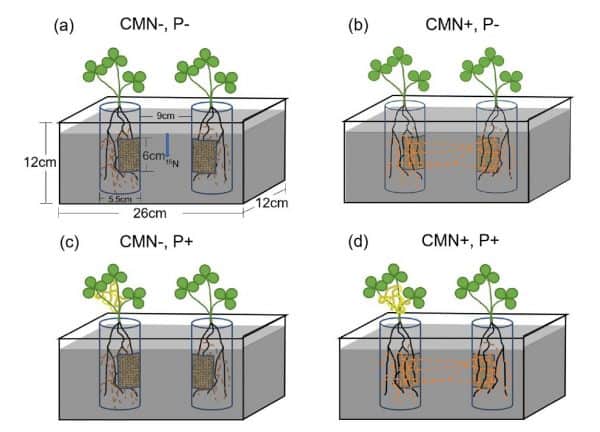 Cascading effects are ubiquitous in nature and can modify ecological processes. Most plants have mutualistic associations with mycorrhizal fungi, and can be connected to neighboring plants through common mycorrhizal networks (CMNs). However, little is known about how the distribution of nutrients by CMNs to the interconnected plants is affected by higher trophic levels, such as parasitic plants. We hypothesized that parasitism would indirectly drive CMNs to allocate more nutrients to the nonparasitized neighboring plants rather than to the parasitized host plants, and that this would result in a negative-feedback effect on the growth of the parasitic plant. To test this, we conducted a container experiment, where each container housed two in-growth cores that isolated the root system of a single Trifolium pratense seedling. The formation of CMNs was either prevented or permitted using nylon fabric with a mesh width of 0.5 or 25 lm, respectively. In each container, either both T. pratense plants were not parasitized or only one was parasitized by the holoparasite Cuscuta australis. To quantify the nutrient distribution by CMNs to the host and neighboring plants, we used 15N labeling. Growth and 15N concentrations of C. australis and T. pratense were measured, as well the arbuscular mycorrhizal fungi–colonization rates of T. pratense. We found that parasitism by C. australis reduced the biomass of T. pratense. In the absence of the parasite, CMNs increased the 15N concentration of both T. pratense plants, but did not affect their biomass. However, with the parasite, the difference between host and neighboring T. pratense plants in 15N concentration and biomass were amplified by CMNs. Furthermore, CMNs decreased the negative effect of C. australis on growth of the host T. pratense plants. Finally, although CMNs did not influence the 15N concentration of C. australis, they reduced its biomass. Our results indicate that when T. pratense was parasitized by C. australis, CMNs preferentially distributed more mineral nutrients to the nonparasitized neighboring T. pratense plant, and that this had a negative feedback on the growth of the parasite. (Ecology, 2021, 102(5), e03339)