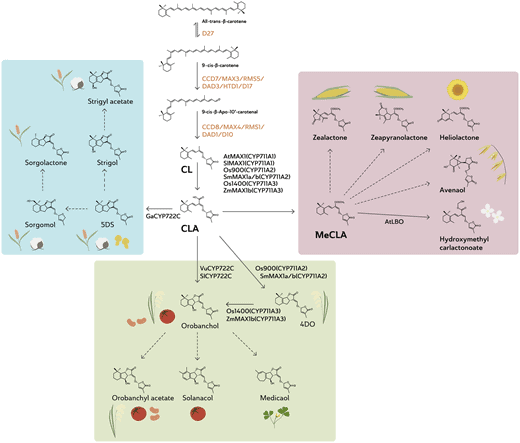 The Orobanchaceae are obligate root parasitic plants that are completely dependent on a host for the completion of their lifecycle. To minimise the risks of this dependency, these parasitic plants use chemical cues secreted from the roots of their host to synchronise their development with their host. Well-known chemicals playing a role in this are the germination stimulants and haustorium inducing factors, HIFs. To get a more complete picture of this chemical communication, we used a metabolomics approach in which we analysed the root exudate metabolome of 59 sorghum genotypes, phenotyped a number of Striga infection processes, such as germination, haustorium formation, attachment and Striga growth, and then interrogated this dataset for metabolites statistically related to these phenotypes. This analysis confirmed the role of the strigolactone, 5-deoxystrigol, in germination and several phenolic compounds in haustorium formation, but also yielded a number of new, bioactive, metabolites that had so far not been implicated in these Striga infection processes, including new putative germination stimulants and inhibitors and HIFs.
Intriguingly, while 5-deoxystrigol showed a positive correlation with germination, orobanchol displayed a significant negative correlation, which agrees with the Striga resistance of orobanchol producing genotypes, such as SRN39. The strigolactones are the major germination stimulants for many of the orobanchaceous root parasitic plants, but have also been demonstrated to be a plant hormone and a rhizosphere signal for symbiotic arbuscular mycorrhizal (AM) fungi. The multiple roles that the strigolactones have. with positive as well as negative effects for the host may well be the evolutionary driving force behind the large structural diversity in the strigolactones, with by now over 30 structures identified across the plant kingdom and many more of which the structure still needs to be elucidated. Several studies have shown that different strigolactones have different activity in different biological processes, such as germination of parasitic plant seeds. However, the in vivo biological relevance of the structural diversity in the strigolactone blends exuded by plants is largely unknown. To further unravel the evolution and importance of this structural diversity knowledge of their biosynthesis and perception by the parasitic plants are required. We use a number of approaches to elucidate strigolactone biosynthesis, such as RNAseq and coexpression analysis, and heterologous reconstitution of entir strigolactone biosynthetic pathways in Nicotiana benthamiana. Using this approach we identified a cytochrome P450 that catalyses the first step in the conversion of orobanchol to solanacol, in tomato. With these biosynthetic genes we can engineer plants with altered strigolactone profiles – as demonstrated using Virus Induced Gene Silencing which indeed altered the strigolactone composition of the root exudate – in which we can study the biological consequences of these changes. The progress in our understanding of the strigolactone biosynthetic pathway, strigolactone perception and the biological importance of the structural diversity in the strigolactones will be discussed.

Harro Bouwmeester is Chair of Plant Hormone Biology at the Swammerdam Institute for Life Sciences (SILS) of the University of Amsterdam, the Netherlands. The work in his group is centered around signaling molecules and their role in the communication of plants with other organisms, especially belowground, such as parasitic plants, nematodes and the microbiome. He is recipient of a VICI- and ERC Advanced grant for his work on chemical communication in the rhizosphere and is coordinator of an NWO Gravitation grant on the plant-microbiome interaction.
More information on: http://sils.uva.nl/phb