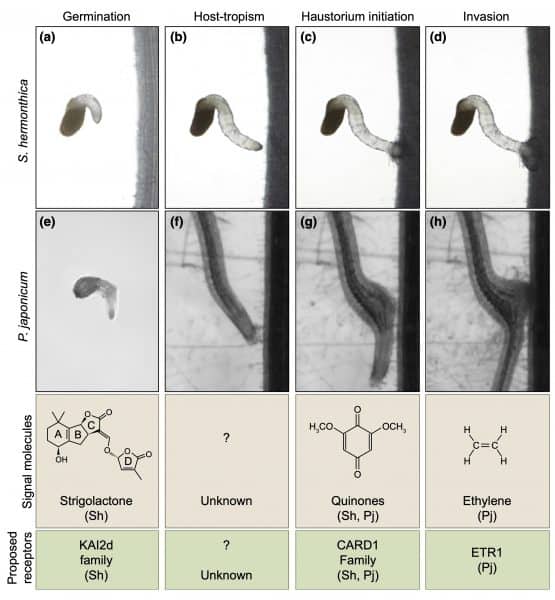 Development of haustorium in parasitic plants involves intimate signaling interaction between host and parasites and is strictly controlled by both intrinsic cellular programs and host-derived signals. Recent advancement in imaging and molecular studies have provided a deeper insight into cell fate changes, gene network and molecular exchange within haustorium, yet the functional parasitic plant genes that mediate host targeting or infection remain largely unknown. With the aim of identifying parasitic genes that control haustorium development, we conducted forward genetic screening in a model species Phtheirospermum japonicum, a facultative root parasite in Orobanchaceae. Two mutants were isolated with elongated haustorium phenotype compared to the wild type. Notably, the mutants were strongly impaired in host tissue invasion. Whole genome sequencing-based SNP analysis identified the responsible genes that encode an ethylene receptor ETHYLENE RESPONSE1 (ETR1) and ethylene signaling mediator ETHYLENE INSENSITIVE 2 (EIN2), respectively. These prompted us to survey the interplay of ethylene between host and parasitic plants. Our study reveals that ethylene signaling is crucial for parasitic plants to infect host by regulating haustorium development via cell division and differentiation at haustorial apex region. On the other hand, host-derived ethylene is targeted by parasite and promotes plant parasitism.

Dr. Songkui is Assistant Professor in Dr. Satoko’s lab in Nara Institute of Science and Technology (NAIST), Japan. He is working on the signaling interaction between host and parasitic plants with a special focus on haustorium development and functions in the Orobanchaceae family.

The Zoom link can be accessed from the IPPS Members-only Area.