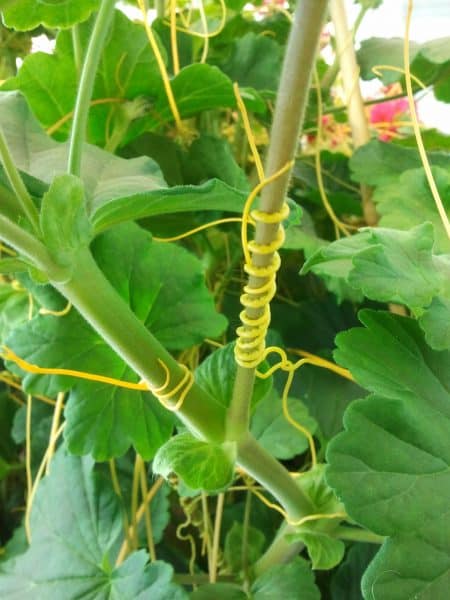 Cuscuta (dodder) species are worldwide distributed parasitic plants. Using a special organ, named haustorium, Cuscuta parasites extract water and nutrients from hosts. Recently, we found that in addition to water and nutrients, hundreds to more than 1500 proteins move between Cuscuta and host plants, and it was found that probably many of these mobile proteins remain biochemically active after they move to the recipient plants. Previous genome sequencing of Cuscuta australis indicated that C. australis genome lost many flowering regulatory genes and thus Cuscuta is not able to flower autonomously. Biochemical and genetical analyses indicated that among the interplant mobile proteins, the host-produced florigen protein, named FT, which is the most important flowering inducer, can be transferred to Cuscuta, where FT interacts with Cuscuta FD transcription factor to activate flowering of Cuscuta. This unique flowering mechanism allows Cuscuta to synchronize its flowering time with that of the host plant. These results illustrate how regressive evolution, commonly found in parasites, may facilitate the physiological synchronization of parasite and host, allowing Cuscuta parasite to time reproduction exactly with that of their hosts, likely optimizing parasite fitness.

Jianqiang Wu received his master’s degree of analytical chemistry from the Dalian Institute of Chemical Physical, Chinese Academy of Sciences (Dalian, China) in 1998. In 2007, he received his Ph.D. of plant molecular biology from the Max Planck Institute for Chemical Ecology, Jena, Germany (supervisor: Dr. Ian T. Baldwin). After another five years of working as a Group Leader at the Max Planck Institute for Chemical Ecology, he joined the Kunming Institute of Botany, Chinese Academy of Sciences, in Kunming, China, where he works on two topics, plant (mainly maize) resistance to insects and parasitic plant-host plant interactions.

The Zoom link can be accessed from the IPPS Members-only Area.