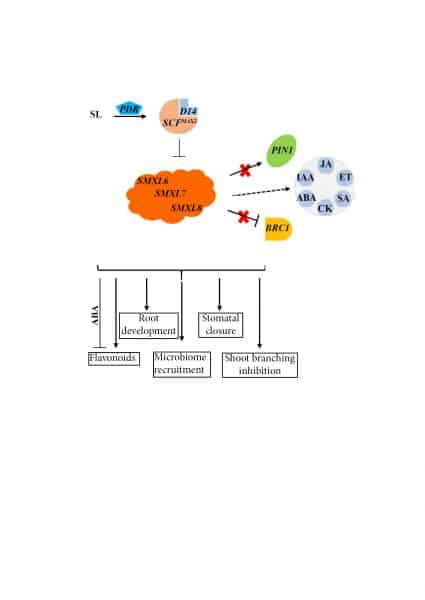 When Cook et al. discovered strigol in 1966 they probably did not imagine the prospects of their newfound molecule. Strigol turned out to be a member of a whole class of molecules, the strigolactones (SLs). SLs are plant hormones that regulate shoot branching and root architecture. Ex planta, in the soil surrounding the roots of plants, they function as signaling molecules for other organisms like micro-organisms and parasitic weeds. As a relatively novel class of plant hormones/signaling molecules, the potential of SLs to impact agriculture has not received much attention. To leverage the possible application of SLs, Ernest Aliche and co-authors published a ViewPoint article in New Phytologist, in which they build upon the current knowledge of the roles of SLs and present application scenarios to implement SLs in agriculture. For instance, a field application of synthetic SLs to trigger pre-planting germination of parasitic weeds (suicidal germination), recruitment of beneficial microbes like arbuscular mycorrhizal fungi (AMF), and synchronization of stomatal closure to minimize water loss during drought conditions. They also emphasize the roles of several stakeholders that would facilitate the implementation of SLs for a sustainable agriculture of the future. Do you want to know how SLs can shape such an intentional smart agricultural future? Then check out their publication: Science and application of strigolactones https://nph.onlinelibrary.wiley.com/toc/14698137/2020/227/4