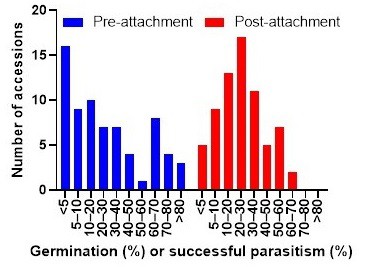 In sub‐Saharan Africa, rice is the third‐largest source of food energy, with a rising demand due to population growth and changes in eating habits. The expansion of rice cultivation by converting fallow, maize, and sorghum fields into rainfed rice fields is one method that will help to close the gap between rice demand and production in the region; however, these rainfed areas are sometimes infested by the root parasitic weed Striga hermonthica (Delile) Benth. An increased variation in Striga‐resistant rice germplasms could provide new practical rice varieties for use in areas of Striga.