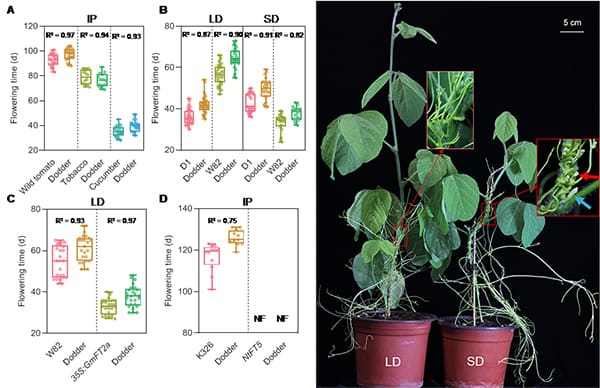 Recently, the Jianqiang Wu Group at the Kunming Institute of Botany, Chinese Academy of Sciences, in Kunming, China uncovered how a dodder plant controls its flowering time. Using different host species and genetically modified plants, this team found that the dodder Cuscuta australis synchronizes its flowering time with those of the hosts, and the expression of FT gene in hosts is required for C. australis flowering. FT gene encodes a very important signaling protein, which is often considered to be a “florigen” functioning in activation of flowering. Under appropriate conditions, FT protein is synthesized in leaves and it is transported to apical meristems, where it initiates flowering program. Analysis of the FT gene in C. australis indicated the existence of an ~ 8.8 kb transposon-like insertion in its second intron, and under all developmental stages examined, the FT gene in C. australis did not show any detectable expression. Furthermore, expression of C. australis FT gene in Arabidopsis did not accelerate Arabidopsis flowering. These lines of evidence suggest that C. australis FT likely had pseudogenized. The team conditionally expressed an Arabidopsis FT gene which was fused with the green fluorescence protein (GFP) in tobacco plants and biochemical analysis indicated that when the host expressed the AtFT-GFP protein, this flowering-inducer also appeared in C. australis; furthermore, when C. australis grew on soybean plants, proteomic analysis revealed the transport of soybean FT signal proteins to C. australis. Interestingly, in C. australis, host FT proteins can interact with the C. australis FD transcription factor, and these protein complexes activated flowering-related genes in C. australis, finally resulting in C. australis flowing.

This study reveals that by eavesdropping on host FT flowering signals, dodder can synchronize its flowering with hosts. This behavior is important, as it likely enables dodder to parasitize diverse host plants and obtain optimal fitness: If dodder has fixed time of flowering, and it is much later than does the host, when host flowers, the nutrient level of the host plant usually drops because of seed development, and the host may even die before dodder flowers; if dodder flowers much earlier than does the host, dodder growth will be prematurely ended, and in this scenario, dodder does not make as many seeds as the dodder that flowers at the similar time as the host.

This study sheds important light on the physiology, ecology, and evolution of dodder and may provide new strategies for biocontrol of parasitic weeds in agriculture and forestry.