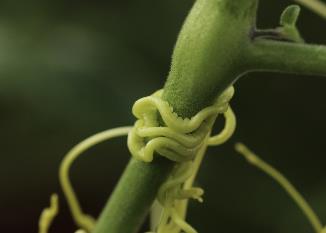 The Jianqiang Wu group (Kunming Institute of Botany, Chinese Academy of Sciences; www.wu-lab.org) reported that large numbers of proteins can be transported between the dodder Cuscuta australis and its host plant. Their proteomic analyses showed that hundreds to more than 1500 proteins moved between dodder and host plants, and hundreds of foreign proteins can even be translocated into the seeds of dodder and host plants. In nature, a dodder parasite often simultaneously parasitizes two or multiple host plants, forming dodder-connected plant clusters. In Arabidopsis-dodder-soybean clusters, they found that more than 700 proteins were translocated between two different hosts through the dodder connections. Importantly, more than 11.5% of the transported proteins remained at least 50% of their original abundance after long-distance translocation. Using Arabidopsis plants expressing different reporter proteins, they showed that these reporter proteins could travel between plants, and they retained their activity in the foreign plants. Thus, it is likely that some of the transported proteins may retain their biological functions after long-distance inter-plant translocation, and these proteins may affect the growth and development and stress resistance of the recipient plants.

This study is the first illustration of extensive inter-plant protein communication. Given that dodder has a very wide host range (across many plant families), proteins with the same functions can be exchanged or transferred, and importantly, lineage-specific proteins with novel functions can also be transferred to the recipients through haustorial connections, between dodder and hosts and among phylogenetically distant host plants, which may endow the recipient plants with novel traits. This study underscores another layer of plant-plant interactions, in addition to those previously identified to be mediated by mRNAs, small RNAs, secondary metabolites, and systemic signals. This dodder-host interaction system can also be used as a new and powerful system to study long-distance translocation of biomolecules (including signals) in plants.